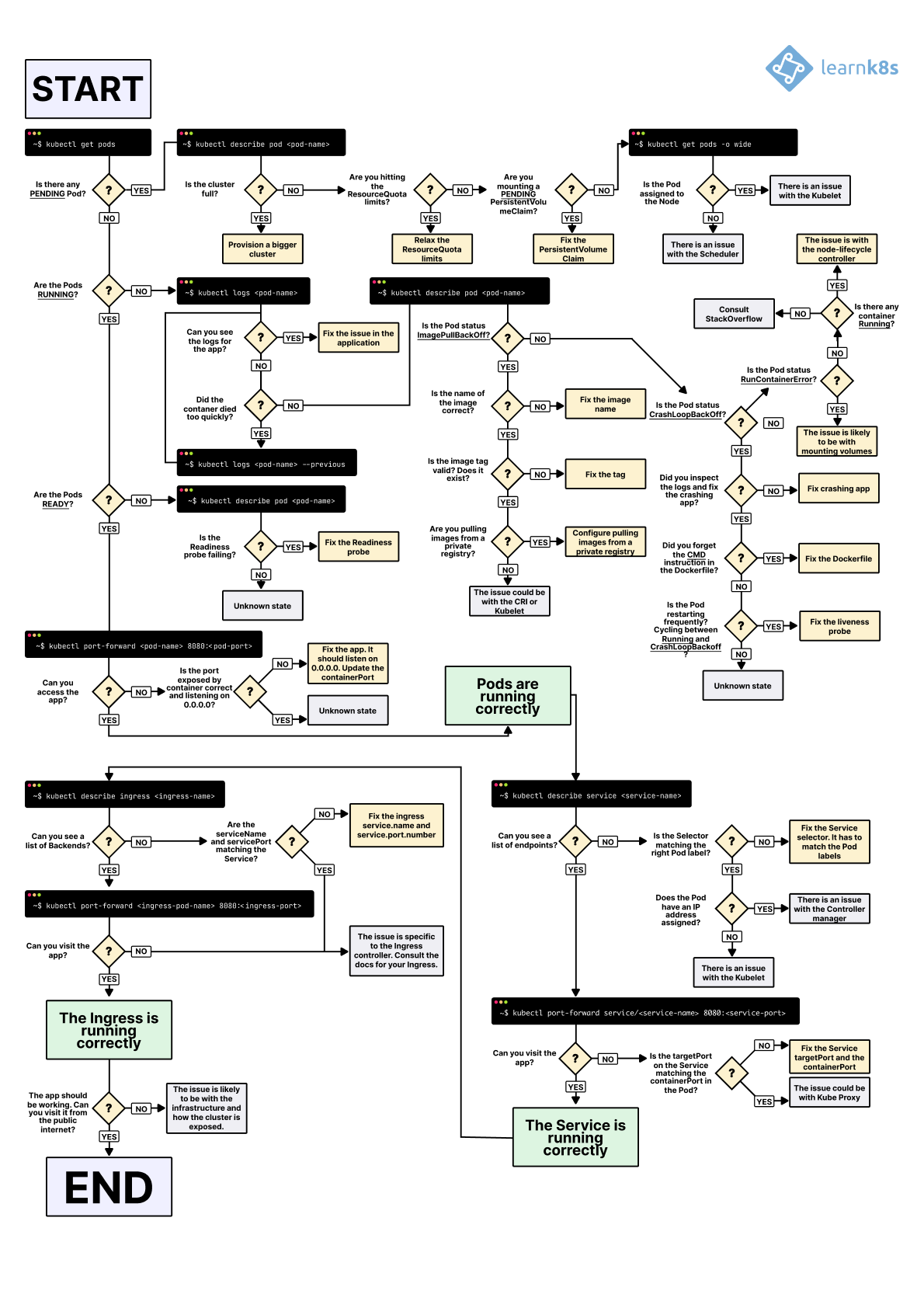 TL;DR: here's a diagram to help you debug your deployments in Kubernetes (and you can download it in the PDF version and PNG).

This diagram is also translated into the following languages:

If you'd like to contribute with a translation, get in touch at hello@learnk8s.io.

When you wish to deploy an application in Kubernetes, you usually define three components:

Assuming you wish to deploy a simple Hello World application, the YAML for such application should look similar to this:

The definition is quite long, and it's easy to overlook how the components relate to each other.

Before focusing on the debugging, let's recap how the three components link to each other.

Let's start with Deployment and Service.

The surprising news is that Service and Deployment aren't connected at all.

Instead, the Service points to the Pods directly and skips the Deployment altogether.

So what you should pay attention to is how the Pods and the Services are related to each other.

You should remember three things:

If you look at the YAML, the labels and ports/targetPort should match:

What about the track: canary label at the top of the Deployment?

Should that match too?

That label belongs to the deployment, and it's not used by the Service's selector to route traffic.

In other words, you can safely remove it or assign it a different value.

And what about the matchLabels selector?

It always has to match the Pod's labels and it's used by the Deployment to track the Pods.

Assuming that you made the correct change, how do you test it?

You can check if the Pods have the right label with the following command:

Or if you have Pods belonging to several applications:

You can also connect to the Pod!

You can use the port-forward command in kubectl to connect to the Service and test the connection.

If you can connect, the setup is correct.

If you can't, you most likely misplaced a label or the port doesn't match.

The next step in exposing your app is to configure the Ingress.

The Ingress has to know how to retrieve the Service to then connect the Pods and route traffic.

The Ingress retrieves the right Service by name and port exposed.

Two things should match in the Ingress and Service:

In practice, you should look at these lines:

How do you test that the Ingress works?

You can use the same strategy as before with kubectl port-forward, but instead of connecting to a Service, you should connect to the Ingress controller.

First, retrieve the Pod name for the Ingress controller with:

Identify the Ingress Pod (which might be in a different Namespace) and describe it to retrieve the port:

At this point, every time you visit port 3000 on your computer, the request is forwarded to port 80 on the Ingress controller Pod.

If you visit http://localhost:3000, you should find the app serving a web page.

Here's a quick recap on what ports and labels should match:

Knowing how to structure your YAML definition is only part of the story.

What happens when something goes wrong?

Perhaps the Pod doesn't start, or it's crashing.

It's essential to have a well defined mental model of how Kubernetes works before diving into debugging a broken deployment.

Since there are three components in every deployment, you should debug all of them in order, starting from the bottom.

Most of the time, the issue is in the Pod itself.

You should make sure that your Pods are Running and Ready.

How do you check that?

In the output above, the last Pod is Running and Ready — however, the first two Pods are neither Running nor Ready.

How do you investigate on what went wrong?

There are four useful commands to troubleshoot Pods:

Which one should you use?

There isn't a one-size-fits-all.

Instead, you should use a combination of them.

Pods can have startup and runtime errors.

Some errors are more common than others.

The following is a list of the most common error and how you can fix them.

This error appears when Kubernetes isn't able to retrieve the image for one of the containers of the Pod.

There are three common culprits:

The first two cases can be solved by correcting the image name and tag.

For the last, you should add the credentials to your private registry in a Secret and reference it in your Pods.

The official documentation has an example about how you could to that.

If the container can't start, then Kubernetes shows the CrashLoopBackOff message as a status.

Usually, a container can't start when:

You should try and retrieve the logs from that container to investigate why it failed.

If you can't see the logs because your container is restarting too quickly, you can use the following command:

Which prints the error messages from the previous container.

The error appears when the container is unable to start.

That's even before the application inside the container starts.

The issue is usually due to misconfiguration such as:

You should use kubectl describe pod <pod-name> to inspect and analyse the errors.

Pods in a Pending state

When you create a Pod, the Pod stays in the Pending state.

Assuming that your scheduler component is running fine, here are the causes:

Your best option is to inspect the Events section in the kubectl describe command:

For errors that are created as a result of ResourceQuotas, you can inspect the logs of the cluster with:

Pods in a not Ready state

If a Pod is Running but not Ready it means that the Readiness probe is failing.

When the Readiness probe is failing, the Pod isn't attached to the Service, and no traffic is forwarded to that instance.

A failing Readiness probe is an application-specific error, so you should inspect the Events section in kubectl describe to identify the error.

If your Pods are Running and Ready, but you're still unable to receive a response from your app, you should check if the Service is configured correctly.

Services are designed to route the traffic to Pods based on their labels.

So the first thing that you should check is how many Pods are targeted by the Service.

You can do so by checking the Endpoints in the Service:

An endpoint is a pair of <ip address:port>, and there should be at least one — when the Service targets (at least) a Pod.

If the "Endpoints" section is empty, there are two explanations:

If you see a list of endpoints, but still can't access your application, then the targetPort in your service is the likely culprit.

How do you test the Service?

Regardless of the type of Service, you can use kubectl port-forward to connect to it:

If you've reached this section, then:

But you still can't see a response from your app.

It means that most likely, the Ingress is misconfigured.

But before diving into Ingress specific tools, there's something straightforward that you could check.

The Ingress uses the service.name and service.port to connect to the Service.

You should check that those are correctly configured.

You can inspect that the Ingress is correctly configured with:

If the Backend column is empty, then there must be an error in the configuration.

If you can see the endpoints in the Backend column, but still can't access the application, the issue is likely to be:

You can isolate infrastructure issues from Ingress by connecting to the Ingress Pod directly.

First, retrieve the Pod for your Ingress controller (which could be located in a different namespace):

Describe it to retrieve the port:

At this point, every time you visit port 3000 on your computer, the request is forwarded to port 80 on the Pod.

Does it work now?

If you still can't get the Ingress controller to work, you should start debugging it.

There are many different versions of Ingress controllers.

You should consult the documentation of your Ingress controller to find a troubleshooting guide.

Since Ingress Nginx is the most popular Ingress controller, we included a few tips for it in the next section.

The Ingress-nginx project has an official plugin for Kubectl.

You can use kubectl ingress-nginx to:

The three commands that you should try are:

Please notice that you might need to specify the correct namespace for your Ingress controller with --namespace <name>.

Troubleshooting in Kubernetes can be a daunting task if you don't know where to start.

You should always remember to approach the problem bottom-up: start with the Pods and move up the stack with Service and Ingress.

The same debugging techniques that you learnt in this article can be applied to other objects such as:

Many thanks to Gergely Risko, Daniel Weibel and Charles Christyraj for offering some invaluable suggestions.